On September 29th, 2010 Vermont Senator Patrick Leahy called attention to the Imprisonment of the Seven Baha’i leaders in Iran and to the long-term persecution there of the Iranian Baha’i Community. The full text of his speech to the United States Senate is here

Since the Baha’i Faith originated in Shiraz, Iran, in 1844 it has been vehemently opposed by powerful figures in the country’s Shīʻah Religious hierarchy. Some of the social teachings of the Baha’i Faith, such as its stand on womens rights, and the principle of each individual’s responsibility to investigate truth for his or herself, have for decades been seen as a threat by the ultra-conservative clerical regime. False charges -and in many cases overt acts of violence- have been used in a long-standing effort and campaign to eliminate Baha’is entirely from Persian Culture. In recent times, this unrelenting campaign of persecution has involved the loss of jobs, pensions, properties and inheritances; discrimination in education and employment; violence incited by state-sponsored propaganda; arbitrary arrests and unlawful trials; and hundreds of individual Baha’is being killed for their beliefs.

Just two years ago, in 2008 a group of seven “Friends in Iran” who had been managing the affairs of this large religious minority, such as recording marriages, handling divorces, assisting with burials, sending letters of introduction for traveling Baha’is, arranging for worship services, and similar activities – were summarily arrested and imprisoned (see Iranpresswatch and iran.bahai.us for extensive details). Although they have been law-abiding citizens peacefully practicing their religion, nevertheless they were recently convicted on baseless charges including “espionage for Israel”, “insulting religious sanctities”, “propaganda against the system”, and “corruption on earth” (“ifsad fil arz”) and sentenced -most unjustly- to ten more years in Prison. The photo below was taken shortly before their original arrest in 2008:

More Recently, On August 31, 2010 CNN’s Belief blog interviewed Minoo Vosough, an Iranian Baha’i who was arrested in 1984 and held in Evin and Gohardasht prisons for 3 months – the same prisons in which the seven “Friends in Iran” have been held. Click the image below to view the video on the CNN Website 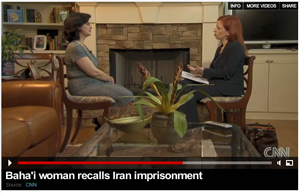 In November 2009, ABC News in Scottsdale Arizona published this interview on the plight of the Baha’is of Iran:

…if the religions investigate reality and seek the essential truth of their own foundations, they will agree and no difference will be found. But inasmuch as religions are submerged in dogmatic imitations, forsaking the original foundations, and as imitations differ widely, therefore, the religions are divergent and antagonistic. These imitations may be likened to clouds which obscure the sunrise; but reality is the sun. If the clouds disperse, the Sun of Reality shines upon all, and no difference of vision will exist. The religions will then agree, for fundamentally they are the same.